African tulip trees have long been cultivated around Queensland and elsewhere in Australia as a garden plant and street tree. However, it is now a declared weed species and is regarded as a significant environmental pest in this state, as well as in the Northern Territory and on Christmas Island.

Its status as a pest is being closely watched in northern New South Wales and other parts of northern Australia. We recently released an article that gave a general overview of invasive tree species that are commonly found in the Moreton Bay region but wanted to single out the African Tulip due to its impact on native bees.

The African tulip is an exotic from tropical western Africa. It is well known for its very distinctive showy bright orange-red tulip-shaped flowers that cluster densely at the tips of its branches. This tree flowers year-round, with a peak season in spring. It also grows long (15–20 centimetre) seed pods. These can disperse around 500 winged, papery seeds each before dropping.

This tree can grow to enormous heights (up to 25 metres) with a wide spreading crown, which is part of the problem, as it will crowd out native trees. As its seeds are readily dispersed by wind from a great height and also by water along the waterways that it tends inhabit, it can be found in many areas where it is not wanted. This includes agricultural land and rainforests in both tropical and subtropical parts of the state.

The impacts of this pest tree go further, however. When its abundant nectar ferments, it becomes toxic to native Australian bees and kills them. This can have a devastating effect on Australian native trees, as native bees play a critical role in pollinating them. The role of bees in our world is often not fully understood but it’s safe to say without them our world will slowly perish. 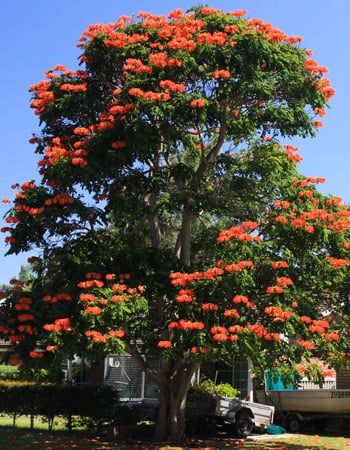 O’Brien’s Tree Care can remove even the largest African tulip tree safely. We have seen the damage they can do not only to the quality of private and public land but also to fences. It is also important not to mulch from African tulips as it reproduces so readily and by various methods.